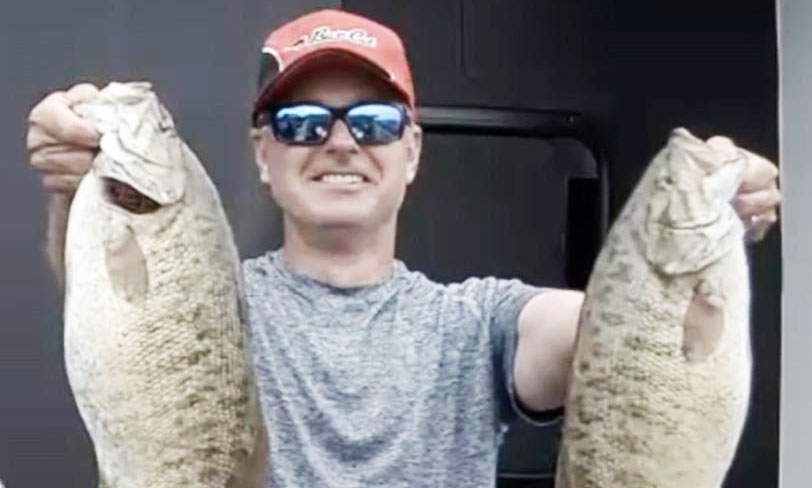 On July 23, 2018, our blog featured Heath Wagner, an angler from Angola, Indiana. The article was his take on how to effectively prepare for bass fishing tournaments, and the timing could not have been better. Days prior, July 16, he won the FLW BFL Tournament on Lake St. Clair in the Michigan Division. This was not so unique, as he had four previous victories, but he set records with this one. His 28-pound, 15-ounce 5-fish limit of smallmouth bass is the heaviest individual limit in the history from the state of Michigan. It was also the largest bag of smallmouth bass in FLW history – on any level! Furthermore, he led his co-angler, Tony Mitchell, to victory as well with 22 pounds and 15 ounces.

This day of days for him was set up by his practice. Here is how he did it.

Practice began on Monday, July 9, for the Saturday tournament, and he used information obtained online to begin his search. The FLW Tour Tournament was on St. Clair the week before. Many of the top finishers were fishing around the Belle River Hump area, so that is where he began.

Wagner has considerable experience on St. Clair, and knows the lake well. “The key is finding the ‘sweet’ spots,” he explains. “Big fish set up on specific structure. Many anglers believe that the big ones are just randomly out there roaming, but they’re on something specific.” He adds, “When I catch a big one (4.5+ pounds), I figure out exactly where that fish came from, and what it was holding on.” By using his trolling motor, he will go to where the bite came from and use his eyes or electronics to determine what the fish was relating to. This is where he punches in a waypoint on his graph because these are the sweet spots that often hold multiple big fish.

He confesses, “There was a mega-school of bass in the Belle River Hump area.” After driving the 18 miles to get there, it took just 30 minutes before he and his partner, father-in-law Len Myers, to boat a 23-pound limit of smallmouth bass. But he was not content, “It was just Monday, and the tournament was on Saturday. I feared they would leave before then, so I expanded on the area.” Expanding the Area For Smallmouth Bass

Expanding on the area consisted of finding as many sweet spots as possible. “The fish were in 18 feet of water, and the sweet spots were where sand bordered perch grass or, even better, shell beds. The shell beds were the sweetest of spots.” He admits some good luck, “It was super calm that day, so I could see the bottom in that depth. I just used my trolling motor to go in circles visually looking for dark spots and then test them with the drop shot or spybait.” Sweet spots are recognizable because they are dark in comparison to the predominant sandy bottom.

“As I got farther away from the sweet spots, the size of fish went down. Three pounders don’t get the prime real estate on St. Clair. They get pushed away by the 4, 5, and 6 pounders.” He only investigated when he caught a large fish. The smaller fish told him where to avoid. “I’ve learned through experience that the big fish on St. Clair are never random. Something holds it there, and those spots reload. Those spots will produce over and over.” At the end of the day, he had located several sweet spots, and their best 5 fish was more than 26 pounds!

Wagner spent Tuesday and Wednesday exploring the St. Clair River. This river connects Lake St. Clair to Lake Huron. He explained, “I was mostly there because it was windy on the lake. But also because if it blows on the lake during the tournament, you need to have spots on either the St. Clair or Detroit Rivers to get out of the wind.” Strong wind can cause big waves making it impossible to fish effectively or can even make it dangerous.

“The river is ultra-clear and has some real big fish living in it,” he reveals. “You can see bottom in 30 feet of water, but they are really hard to catch.” Like on the lake, he could visually see the fish, “Schools of 10-15 fish were holding around current breaks. That could be a log, rock, trough, anything. The problem was I could only get one or two fish to react to anything I tossed at them.” The most effective bait was a 1/32-ounce, black hair jig. “They bit it, but getting that bait to the bottom and working it effectively is extremely hard. A jerkbait would also get the fish excited, but normally they would just follow it to the boat. Occasionally, one would strike it.”

Many challenges exist in the river. Even though he was locating schools of quality fish, only one bass per school would cooperate. This would mean during the tournament, if he was stuck with this strategy, he would have to be on the move constantly – catch one fish, then run off to the next school. Repeat. He would have to do this repeatedly throughout the day.

After two days in the river, he felt confident he could catch a 19-20-pound limit by rotating through 15 schools of 3-5-pound fish. While respectable, he knew that would not win the tournament. Luckily, the wind calmed down on Thursday, and the beat down resumed. 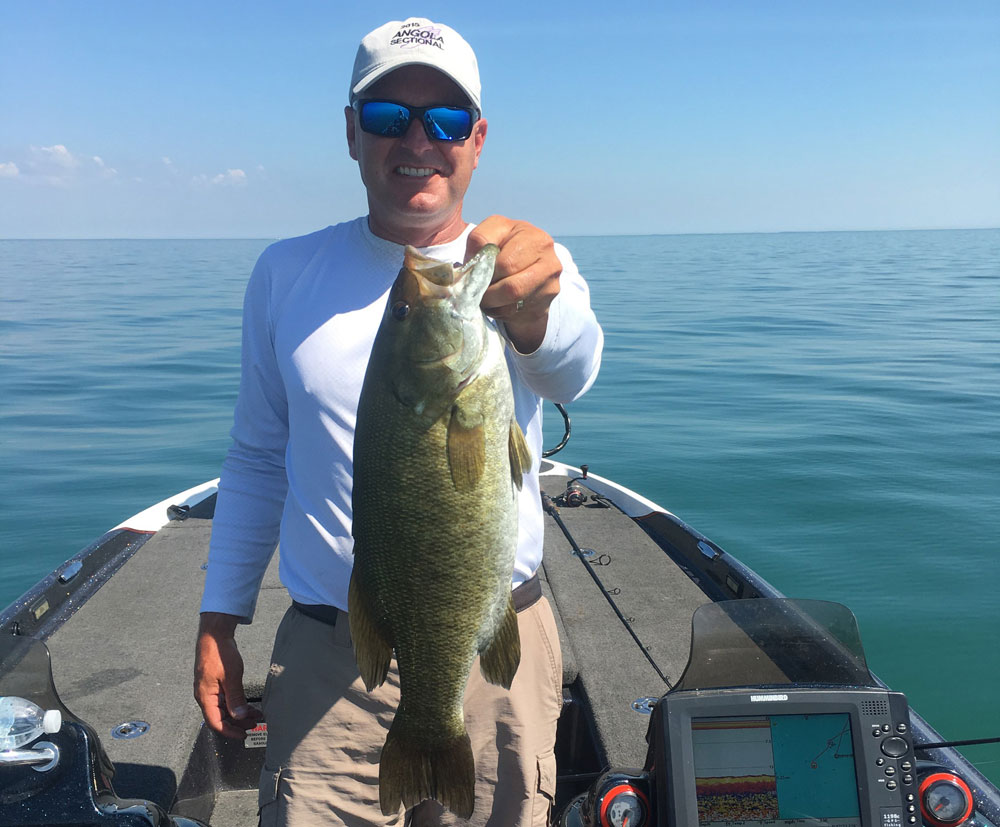 Back to the Belle River Hump

When he returned to his sweet spots on the Belle River Hump, he was greeted with over 40 bass boats fishing the same area. They had the same information about the FLW Tour event. “Some were competition, some were guides, and others were pleasure fishermen,” he recalled. “It was kind of nuts, but also normal for St. Clair. The pressure [from anglers] can change fish, which means an angler should also be prepared to change.”

Stating the fish were still there is an understatement. In the first 20 minutes, he and Myers boated 10 fish that would have collectively weighed over 50 pounds! This confirmed his sweet spot strategy, but the pressure of other anglers kept him worried and on his toes. With his success, other boats crept in closer. “I’ve seen the pressure from other anglers move a school of fish, so I began anticipating where they might move to if they did.” It is no different from a responsible angler protecting their boat with Megaware products from inevitable dangers in the water. He was now at the stage of looking for protection, an insurance from the masses.

Wagner moved a mile away from his sweet spot and began his search just as he did on Monday. He was looking for dark spots, slinging the drop shot rig and spybait, and using the size of fish to as a guide. Throughout Thursday and Friday, he located a handful of other sweet spots, but most importantly, they were away from the crowd of other boats and in places the school may move to next.

Wagner was number 135 out of 145 boats to take off, which meant several of the sweet spots he had found in the crowd of other anglers were sure to be taken by time he arrived. “I began .6 of a mile away from the crowd and had a limit that weighed 20.56 pounds in 20 minutes.” His insurance plan paid off big time, but he was just warming up. “One of the first fish I caught weighed 4 ¾ pounds, and I was able to locate exactly where it came from. When I found it, I told my co-angler ‘that’s the stuff!’”

Wagner went on to wreck the smallmouth bass July 16 on Lake St. Clair. “Basically, I had two sweet spots that I figure-eighted between. Each time I came up to one, I would catch 2-20 bass. By 9:00 AM he had a 26 pound limit of smallmouth bass in his livewell – a monster sack for any place. His limit included a gargantuan 6-pound 3-ounce smallmouth!

Each of his fish fell victim to a drop shot rig, “I use a 3/8 ounce weight with a leader between 14-16 inches long. His baits of choice were an assortment of ZMan Elaztech baits.” However, his co-angler also cashed in on his find. He went on to accrue a 22-pound 15-ounce limit!

By any angler’s expectations, it was a day of days that is unlikely to be repeated anytime soon. Still, this was not by chance, but a result of meticulous attention to detail and preparation led to the big payday. “My experience on the lake helps me understand what is going on pretty quickly. It was also key that I found as many sweet spots as I could. The school of fish did not really move much, but I found sweet spots that other anglers had not.”

Not surprisingly, eventually other anglers crept closer to him, but it was too late for them. By 1:00 PM he had a 28-pound 15-ounce record setting limit of smallmouth bass. He solidified himself as a legitimate Lake St. Clair smallmouth guru.