The Megaware KeelGuard R & B Bass Circuit Classic bass fishing tournament held on the Detroit River October 10-11 can be accurately described with two words: jaw-dropping dominance. Mark Farver and Steve Kline from Indiana brought limits of smallmouth bass rarely seen from one of the greatest smallmouth bass factories on the planet. They dominated and dropped the jaws of onlookers.

Winning this event is no slouch. The R & B Bass Circuit is one of the biggest and most competitive bass circuits in the states of Indiana and Michigan. Competition is stiff and full of diehard smallmouth anglers. Fifteen tournaments in 3 divisions throughout the season produced 11 different winning teams – winning is hard.

This event brought the best teams from those 3 divisions and after 2 days, the champions won by over 15 pounds! Even more impressive was the size of their fish. Day 1 saw them bring a commanding and stunning, 26.13-pound 5-fish limit to the scales! They bested the second-place team by nearly 5 pounds But they were just warming up.

On the second and final day, they snatched an unheard-of 27.98-pound 5-fish limit, making their 2-day total 54.11 pounds! The runner-up team of Brian and Derek Molnar had a respectable 39.01 pounds and were bested by over 15 pounds. (See Results)

Here’s how it happened:

Farver and Kline arrived 2 days before the tournament to search for the golden bronzebacks in a gargantuan playing field. The event would take off out of Elizabeth Park Marina, which is just a couple of miles north of Lake Erie. Thirty miles north of the ramp is Lake St. Clair. With the exception of Canadian waters, due to travel restrictions, all of the connecting waters were open to the participants.

“The first thing we did,” admitted Kline, “was check out some spots which produced for us 2 years ago.” These were spots several miles out on Lake Erie, and they were not overly pleased with what they found. “We caught some fish, but not the size that we caught 2 years ago or the size we needed to win.”

Adjusting to the conditions is a principle for professional anglers, which Farver and Kline also adhere to. They both credit their success to a subtle observation, “That first day of practice,” Kline revealed, “a huge school of minnows came up to the surface under our boat. A few minutes later, about 75 yards away, we saw a school of bass busting on the surface.”

They quickly trolled over to the schooling bass. “Our first cast with the Alabama Rig,” Farver said, “caught a 5.3-pound smallie.” Over the next 30 minutes, they loaded the boat with giants. Kline surmised, “We think the minnows made a fatal turn. When they swam over those smallmouth [75 yards away], they were attacked. This gave away the bass’ hiding spot to us, and luckily no one else was around to see it.” The fish were on a very specific spot, easy to miss, and the busting bass gave them an exact waypoint of it.

After two days of practice, they had confidence in 5 spots, but the aforementioned spot was where all 10 of the smallmouth bass they weighed in the competition came. Over 2 days of competition, they weighed 10 bass over 5 pounds, caught and released 10 others, while the entire remaining field harvested just a single 5-pounder.

Despite being on Lake Erie, the Detroit River played a big role. “The current speed at Elizabeth Park is 9 miles per hour,” Farver explained, “and I believe a couple of miles out in the lake, it is still 7-8. This spot, though, seemed to have more current from areas just 100 feet away.”

Farver added, “As we spent more time there, we noticed an abundance of floating weeds funneling through it.” Kline shared, “It was a small trough. We were in 17 feet of water, but both sides of it rose to 15 feet. There were also a couple of small rock piles.” It may seem insignificant, but in water with this strong current, a perfect ambush spot was created. Farver explained, “Fish get behind things, like those rocks, because they act like an eddy. The trough acts as a funnel for bait to come through.” This magic spot was less than 50 feet wide.

They used their practice to not only catch fish but to learn of the conditions. “We began in areas we had some past success,” Kline pointed out. “Sure, we hoped they would produce, but spots with history should only be used as a guide. If the fish were not there, then that would tell us to look for different types of areas.” Keeping an open mind was imperative.

“Once we had some success, we looked for additional spots with similar characteristics – hidden eddies that would be revealed with floating weeds.” Mother Nature was determined to make the competitors earn every fish they caught this day. Anglers were greeted with SSW winds over 20 miles per hour. Waves were able to build for over 30 miles before hitting the mouth of the Detroit River, and they got big. “We made it to our spot, but we fished in waves between 4-5 feet tall,” Farver recalled.

These waves were also going against the strong current of the river. “Believe it or not,” Farver shared, “it helped with boat positioning and casting. Since the boat was being pushed in both directions, we just hit the Spot Lock on the trolling motor and it turned us parallel towards our spot.” Casting their Alabama Rigs up current and bringing them slowly back with the current was the best retrieve, and the boat position allowed them to stay spaced out on the deck. Plus, the south wind helped them make extra-long casts.

The impact of waves going against the current might be more myth than thought. Farver explained, “Waves are only impacting the top couple of feet. The current below is still going strong. Since our fish sitting on the bottom, we felt they were not impacted at all.”

“We began in our second spot because we were afraid other anglers would be fishing it as well. We thought our primary spot would be left alone,” Kline shared. “After an hour, we had a 20-pound limit.” They spent the day rotating between 2 spots, and each time they revisited one, they would catch a handful.

Adaptation is the central message on how they found this school of giant smallmouth bass during practice, but it was also applied during the tournament. “We caught all of our early fish on the Alabama Rig,” Kline admitted, “but when the sun came out, they stopped biting it. That’s when I picked up a tube and caught several more.”

But it wasn’t without struggle. Kline admits, “We both got seasick! It was so bad, we wouldn’t even net each other’s fish!”

All 5 fish they brought to the scales came from their primary spot. In total, they caught 5 limits! Kline, “On the last cast of the day, we culled out a 4-14 pounder with one over 5 pounds.” Once again, winds were 20 mph strong, but from the opposite direction: northeast. This made waves smaller, but casting more difficult. “The A-Rig catches a lot of wind,” Farver explained, “so we had to adjust our reels to avoid backlashes.” It made no difference.

They spent the day on their golden spot. Kline said, “It was a much better bite. In the first hour, we had a 22-pound limit, and they bit all day.”

Farver added, “On two occasions after casting my Alabama Rig, Steve hooked into one, so I laid my rod down to net his fish. My rig just sank to the bottom. After landing Steve’s fish, I picked up my rod, and a smallmouth was already loaded on.” On this day, they never stopped eating the Alabama Rig, but once Farver broke off two, he was done with it, “Those things are expensive! And I wasn’t going to lose another one, so I began casting a spinnerbait and caught several; including one that we weighed in.”

The result was a stud field utterly dominated and left with their jaws left open. Bait selection determined by the baitfish they knew were present. “The bass were eating the baitfish as it went through the trough,” said Kline.

Competitive anglers go through painstaking steps to ensure the survival of their catch. “A lot of times in a team event,” said Kline, “we will put more than 5 fish in the livewell.” This is legal in most states and tournaments. “Smallmouth will often stop biting after releasing one, so keeping up to 10 (more than 10 would break state law) in the box keeps the bite going longer. However, the size of these fish didn’t make that possible. Stuffing each livewell with 5 of these would crowd them and dangerously stress them.”

“We filled both livewells with water, put 2 in one, and 3 in the other. We kept the aerators running all the time. One fish began bleeding after catching it, so we put some Rejuvenade in its mouth and 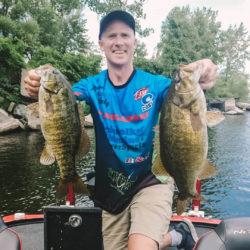 The Lost Angler: Attention to Detail

I’m an average angler who loves to tournament bass fish. I left home to chase my dream of competing full time against the best anglers in the country. Most of the time I have no idea what I’m doing, and this is my behind-the-scenes story of life on the road, fishing, and learning a little something along the way.
Read More »
November 11, 2022 No Comments The shad spawn is currently unfolding in many parts of the country providing ample and
Read More »
June 10, 2022 No Comments Off Season Preparation for Bass Fishing

The term off-season is used commonly in the world of sports. This is the period
Read More »
January 12, 2022 No Comments